How can we help you today?

With respect to the amendments to the Income Tax Act for the Financial Year 2020-21, the FBP Components to be brought to taxation in case of New Tax Regime.

To make the same effective Paybooks, the following process is being developed:

With respect to IT changes with effect from 01/04/2020, Paybooks has provided option for the Employees to choose the regime of their liking, Old Tax Regime or New Tax Regime.

And in the New Tax Regime, no exemption is allowed.

As per Paybooks, any FBP declarations made will be reduced from the Special Allowance.

This will reduce Gross Earnings and IT on that too.

Only unclaimed Reimbursements will be considered for IT computation.

Since the Allowances given as Reimbursements too are taxable, the following changes have been done in Paybooks.

Note: If the FBP components are mapped as Non-Taxable, then the claimed amount will neither be considered as Earnings nor as Deductions even if mapped for exemption. 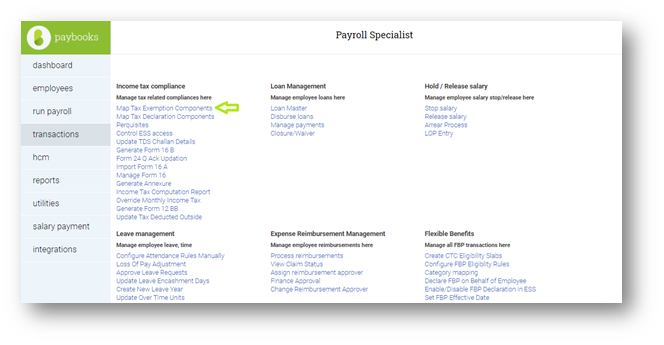 For the New Tax Regime, section 17 items, there is new column in the Map Tax Deduction Components, which needs to be enabled to show in the exemption. 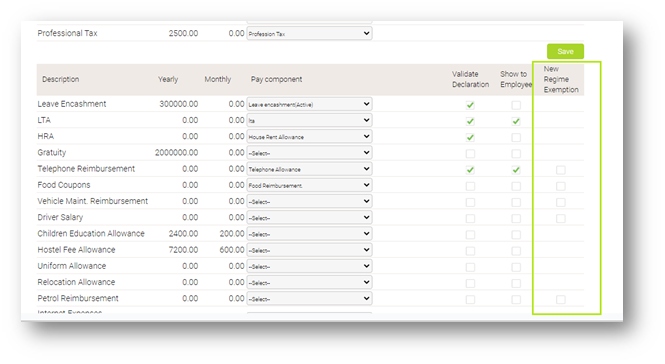 This is as per the Company configurations; if the company wants it enabled, else disable it.

For example, Food Coupons, being section 17 items, some are interpreting it as exempted and some as not exempted.

If component has maximum value as INR 0/-, then only the claimed amount will be shown as exempted amount.

There is no component which has no monthly value but has the annual maximum value.

This has effect on the existing computations as currently Annual values are being displayed for section 10 exemptions wherever limit is mentioned.

The Income Tax computation sheet has got two options, FBP with Projection and FBP without Projection.

For all other purpose, only the claimed amount will be taken for Payroll Process, Update to IT Excel, etc.

Every month Income Tax changes based on the claimed amount. The Employees must refer their Income Sheets which will be updated to the ESS End upon locking the payroll and publishing the Payslips.

This is nothing but the IT Sheet as per the Payroll execution.

Earlier for the Employees under Old Tax Regime, the claimed amount was not updating under Gross Earnings, but exemptions were duly considered; hence the Taxable income was less.

Post-implementation, the claimed amount will be added to their income and exemptions will be as it is, hence resulted in more taxable income.

All FBP reports will be as earlier and no changes in the FBP reports.

Gross Earnings will include Earnings plus FBP declared amounts.

For Employees under New Tax Regime, the Deductions will be as per the components selected for exemption.

For Employees under Old Tax Regime, the Deductions will be as earlier

Did you find it helpful? Yes No

Send feedback
Sorry we couldn't be helpful. Help us improve this article with your feedback.